Meetings Fourth Tuesday of Every Month at Des Moines Christian Church
·
at 1 pm and 6:30 pm
info@dmaqg.org

Here’s the story behind our 2013 Show Quilt…

As told by Marge Pearson, Show Quilt Chair (excerpted from our newsletter)

Today’s quilters cannot but have a great deal of respect for the women who went ga-ga when they were first introduced to hand-painted, printed textiles coming from India. (Text books say it was all about the spices!) Those women who could not afford the 30 yards it would take to dress their bed with a spread and draperies of it, became very creative and began what is known as Broderie Perse. They purchased a small piece of the print, later reproduced in France and England, and cut it up!

We honor these women with the center of our Legacy Quilt. We are using a reproduction of an 1810 Chintz found in the Virginia Quilt Museum. It is a tree of life theme that was so popular at that time. 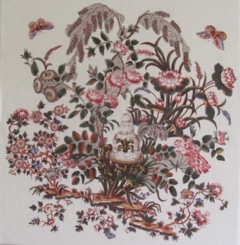 Once women started cutting up fabric and sewing it back together, bed coverings would never be the same. The English loved geometric shapes. Hexagons were one of the shapes they used. It could be the ladies were inspired by the beautiful tile floors in the great public buildings of the time. They would cut heavy paper to the desired geometric shape, baste pieces of fabric to them, and whipstitch the shapes together. Today we call the process English Paper Piecing (EPP).

The English Paper Piecing technique crossed the ocean and was used by the colonists. It has since had many revivals. “Hexies” are a current fad in our quilt making, as it was in the 1930s. Each revival brings a new twist to the technique. An example would be the Grandmother’s Flower Garden of the 1930s.

The first frame of our legacy quilt will honor English Paper Piecing. When the rebellious colonial women started skipping the card stock basting and just began sewing pieces of fabric together, the English piecers were mortified! We will honor these rebels in another frame to the quilt! Thank you to the members of the Guild who helped with the EPP: Jan Hetzel, Judy Proksa, Kerri Hill-Elliot, Linda Montet, Mary Miller, and Virginia Berger.

Quilt historians date the first published quilt pattern to 1835. It happened to be a hexagon template, but it was the beginning. By 1875 publishers had discovered patterns would sell subscriptions as block patterns were common in newspapers and magazines. The rebellious American women loved them. They began piecing quilts without the use of cardstock and loved the portability of individual blocks, compared to medallion quilts which were very English.

We honor these women with a variety of well-known pieced blocks. A study of the block names can be very entertaining. But here we will name the ladies who made the blocks for this part of the quilt. They are Jan Hetzel, Judy Proksa, Kerrie Hill-Elliott, Mary Miller, Marge Pearson, and Virginia Berger.

Historians date the discovery of a permanent ink for fabric as 1840. Autograph quilts were made prior to this date, but the signatures would have to be done in embroidery so as to preserve them. These quilts, also known as album quilts, became great fund raisers. You would pay to have your signature on the quilt and then you would pay for a chance to win the quilt. Another function of this style quilt would be a friendship quilt and would be made for a retiring pastor or dear friend or family member moving away.

To add another bit of the “Legacy of Quilting” to our project, we have done the autographs in red work. The ladies who did the red work for us are Beverly Brady, Carol Krause, and Carolyn Hoiser. And the names on the quilt are those who helped us become the quilters we are! We have sought the autographs of teachers we have had as guests in our guild, as well as a few well-known quilt instructors. We could not forget our own guild members who are also well-known teachers. Enjoy searching for the names of some of your favorite teachers.

This large section of the quilt includes one more era of quilt history. Crazy Quilts were popular for a brief time. Technically they were not quilts as there were not three layers, nor were they used on beds. They were done to show off the maker’s sewing and creative skills. Could they be the forerunner of our modern artistic quilts of today? Creative Carole Floyd made the two blocks included in our show quilt. You will enjoy seeing them close up when the quilt is on display.

After winning the American Revolutionary War our country had the time, ability, and resources to join the Industrial Revolution. Both thread and fabric became more available and affordable. The hand quilting took on a new flare with the intricate work of feathers and wreaths. We have added a border of trapunto feathers to honor those who went the extra miles to make their work a piece of art. Lynn Witzenburg helped us do it with a modern technique using wash away thread. Now the quilt is in a frame and being hand quilted as it would have been during this Golden Age of Quilting, as well as thirty years ago when our guild began. You will want to join us at least once to be part of this American tradition. (MargeQuilts@icloud.com or 515-778-5231)

1800 – 1825 is considered the Golden Age of Quilting. The gradual departure from cutting up floral fabric to make arrangements on cloth is also in this time period. Ladies began a more stylized floral arrangement. These were done with solids or the small print calicos that were new to the market. The most popular method of attaching them was needleturn appliqué. We sought out a group of appliquers in our guild to add this technique to our quilt. Thank-yous to Angela Lawrence, Deb Kimball, Julee Prose, Linda Arndt, Mary Martin, Mary Shotwell, Nan Earll, and Sharon Meisenheimer.

The final border or frame on a quilt has such a responsibility. It is to seal the quilt with harmony, while bringing your eye to all the work that has gone on before. On this particular quilt it is also the final verse of the Legacy of Quilting. I wanted to choose a pieced block pattern that has stood the test of time. It had to be a very versatile block pattern. It needed to be one that can make an entire quilt, while it could also be a great addition to many quilt patterns. Lets add to its praise that it is one of the most controversial block patterns. What other than the Log Cabin block.

It resurfaced to fame a number of years ago, when it was part of a myth about the Underground Railroad. A few years later, 2006, quilt historian Barbara Beckman clarified that it was a very sweet story, but that is just what it was, a story. There is no evidence of the log cabin block prior to the ending of the Civil War. (Facts and Fabrications) It is thought that the name came about in memory of the childhood home of President Lincoln. Or maybe that is another story.

As for the meaning of the often used red center, a couple years ago Gerald Roy was speaking at an event I attended and he addressed the subject. His thought was that women understood color and knew that a little red goes a long way. As for the block’s use today, in Aug/Sept 2004, Fons and Porter devoted an entire magazine to all the patterns that use this humble block. Then in 2007 Judy Martin published a book that took the block beyond humble. While I paper pieced the blocks, I appreciated another piecing technique the helps produce accuracy.

While the blocks went on the design wall, I could see that something was missing. I wanted to re-emphasis the feathered border done in trapunto. In addition, the closing of the Legacy of Quilting should also include a little appliqué. The log cabins easily turned a curve to add the appliqué.

Now the quilt is on a frame and hand quilters are working on completing it…stay tuned.